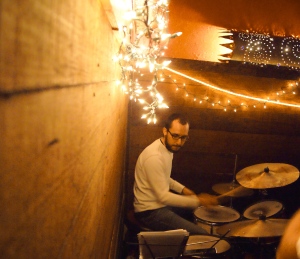 I’m really excited to be heading to Chicago to play some music with some musicians that I’ve been a huge fan of for years.
To my friends in the Chicago area, I’d love to see you at these shows. 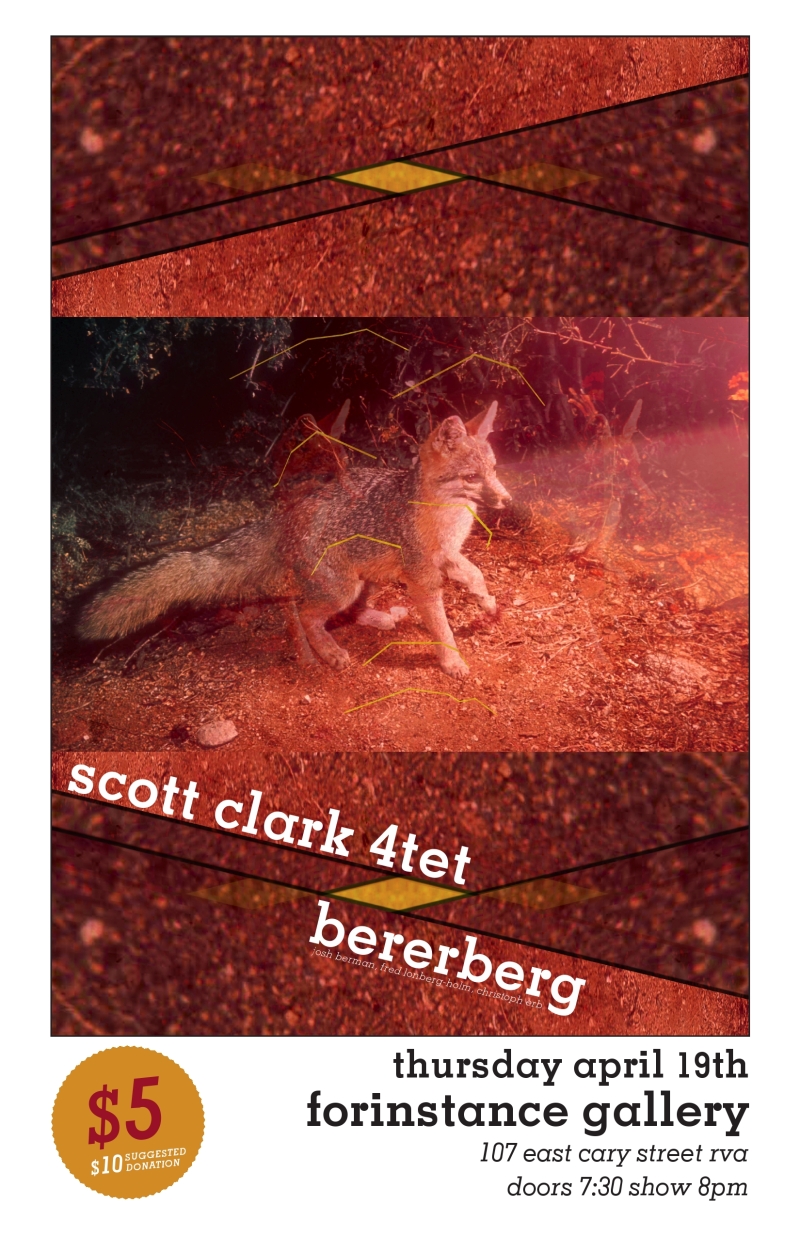 I am very excited to announce this amazing show with some great musicians from out of town and some from in town as well. And, we’re excited about performing at the amazing ForInstance Gallery with the phenomenal artwork of local artist Martin B. Johnson (http://www.martinbjohnson.com/) as the back drop to the show.

We are very excited about bringing this music to you and we hope that you will help support our community of musicians, and artists, and join us for this great night of music.

This show is going to feature a set with the ScottClark4tet playing music that we’ve been working on inspired by some of the events described in the book “Bury My Heart at Wounded Knee” by Dee Brown and by my own research into my family history. It is a suite of music that has been exciting for us to explore and we are excited to present it for the first time as a unified suite.
ScottClark4tet:
Cameron Ralston-bass
Bob Miller-trumpet
Jason Scott-saxophone
Scott Clark-drums

We are also excited to welcome cornetist Josh Berman and cellist Fred Lonberg-Holm from Chicago and saxophonist Christoph Erb from Switzerland, who form the group Bererberg. More about the band and each of the musicians can be found below.
http://joshberman.net/
http://www.lonberg-holm.info/
http://www.erb.li/

Bererberg
Like the name, a mashup of three individuals with different sensibilities but a unified purpose. All three have worked together in different groups but the idea of making a trio only came recently. Erb and Lonberg-Holm have a forthcoming duo record (Screw and Straw). For Berman and Erb this will be only the most recent collaboration of multiple improvised groupings in the States and Switzerland. Berman and Lonberg-Holm are both members of the Fast Citizens and have logged many hours in ad hoc situations in Chicago. So…Two horns and a strung box. A set of references that span “trad jazz” to “noise rock”. Where the music will go from night to night is an unknown but a commitment to follow through is the only guarantee they can offer.

For more than ten years, cornetist, improviser, composer and music presenter Josh Berman has been an essential contributor to Chicago’s active improvised music scene. His work encompasses both developing opportunities and forums for presenting improvised music – as co-founder of the critically acclaimed Umbrella Music Group and as vice president and co-curator of the Emerging Improvisers’ Organization – and performing in a variety of highly collaborative formats – including as bandleader of his own groups, Josh Berman’s Old Idea and Josh Berman and His Gang, and as co-leader of the Chicago Luzern Exchange. In Down Beat Magazine’s 2010 and 2011 Critic’s Poll, Berman was voted Rising Star, Trumpet. In addition to his work as bandleader, Berman has performed and recorded with some of the most internationally respected improvising musicians and composers in jazz and improvised music: Bill Dixon, Ab Baars, Ken Vandermark, Rob Mazurek, and Jeb Bishop. He is also a frequent collaborator with dance artists; his most recent collaboration with dancer Ayako Kato and musician Jason Roebke was awarded a CROSSCUT grant for New Collaborations in Sound/Movement from Experimental Sound Studio and Links Hall. He has toured the United States, Canada, Europe and Japan.

Christoph Erb, is a tenor saxophonist / bass clarinetist, improviser, composer and music presenter. He’s born in 1973, in Zürich, and lives in Lucerne, Switzerland where his own label, veto-records, is based. He organized his own festivals including, veto-records Label-Festival and Erb’s Impro Festival. In 2006 he won the ZKB Swiss Jazz prize with his group erb_gut. In 2007 he was awarded the culture prize of the city Lucerne. 2009 brought the Scholarship of the city and canton of Lucerne for a four month stay in Chicago as an artist in residence where he recorded several sessions: Erb/Baker/Zerang, Erb Alone, Erb/Lonberg-Holm/Roebke/Rosaly, and a duo with cellist Lonberg-Holm. He leads his own bands: Lila, Veto, BigVeto and erb_gut. Erb has performed and recorded with some of the most internationally respected improvising musicians and composers in jazz and improvised music: Jim Baker, Michael Zerang, Fred Lonberg-Holm, Jason Roebke, Frank Rosaly, Jason Stein,Christy Doran, Urs Leimgruber, Daniel Humair, Harald Härter, Peter Schärli, Christian Weber, Christian Wolfahrt and many others. As a sideman he has collaborated with Manuel Mengis Gruppe 6. 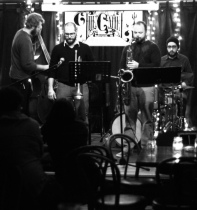 There are some great shows on the horizon for the 4tet….with some amazing musicians from both in and out of town.  First on Tuesday March 27th we will be sharing a bill at Balliceaux with the duo of drummer Brian Jones and saxophonist JC Kuhl.  Next we return to the Commercial Taphouse on Sunday April 1st for a free show.

Then 2 big shows later in the month of April.  First, on April 12th at The Camel, we will be playing with New York’s amazing Endangered Blood made up of Trevor Dunn-bass, Jim Black-drums, Chris Speed-sax and Oscar Noriega-sax.
The following week we’ll be sharing the stage with a trio of great musicians from Chicago and Switzerland featuring Josh Berman– cornet, Fred Lonberg-Holm– cello, and Christoph Erb– saxophone.  This show will be happening at FORInstance Gallery on April 19th.

On May 15th we will be performing for the Listening Room series at the Firehouse Theater with Richmond’s Near Earth Objects.
And then on May 22nd at The Camel, we will be releasing our first album.  For that show we will be sharing the stage with more great musicians from Chicago.  This time it will be the duo of Tim Daisy- drums and Jeb Bishop- trombone.

I know it’s a lot of music in a short time (not to mention all of the other great music that is always happening in RVA!) but it’s exciting to have such great musicians from out of town interested in coming to Richmond to share their music.

We’re also working out a small tour in May in support of the album….stay tuned for details on that.
Thanks to everyone for their support and come support live music!